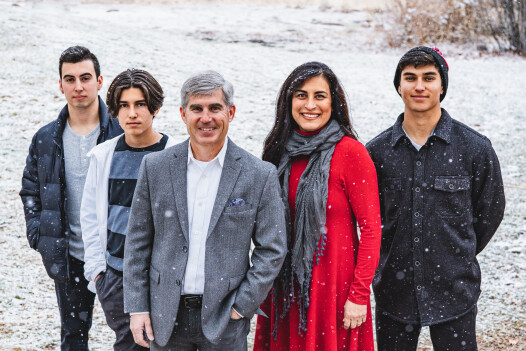 I’m a southern California boy with a bit of a southern drawl.  I grew up in Poway, California.  I’m the son of a preacher and I’ve always had a calling for ministry – a tug in my heart that I couldn’t ignore.  I drifted for a few years, but God never gave up on me.  Growing up we played all kinds of sports but I found my place out on the wrestling mat (which my mother could never enjoy because she always felt like I was hurting someone).  The courage to step out on the mat, by yourself with no one else to blame, will either make you or break you.  I can still hear my coaches screaming from the sidelines “keep moving, don’t stop.”  It’s those words I hear from God, and it’s those words of encouragement I preach to those who call Family Life Church their home.  After returning to my God calling, I went to college in Stockton, California and received my Bachelor's in Theology.  After completing school, I traveled Texas and Louisiana preaching in large and small churches after, thus the southern drawl.

I married the love of my life in 1994 and, together, Sandy and I started following God’s plan for our lives.  Along the way, God has blessed us with three awesome boys—Brayden, Rylan, and Landon.  For the last two decades our heart has been for the local church.  We believe that the hope of the world is not government, academia or business, but a healthy local church leading people, loving the lost and living to make the gospel known.  It is to the church that God has entrusted the message of salvation, which truly changes people’s lives and hearts.  Around Family Life, you’ll hear people say, “we are real people living in the real world with real problems, but, we serve a real God!”

As a native to San Diego, I was the youngest of three.  I was raised in the church - my father and mother in ministry as long as I can remember.  In childhood, I loved the outdoors and our yearly family vacations.  I received a Bachelor's in Political Science from San Diego State University in Political Science, which is ironic, as I don't actually enjoy politics.  I was also able to study abroad at the University of London and had a lot of opportunity to travel before I married Rob, thus my love for travel to this day!

Rob and I were acquaintances as teenagers, but after re-connecting several years later at a conference, we had a quick romance and married nine months later.  Although I just moved up the freeway from the City of San Diego into Poway after marriage, it was a major adjustment for me, not only moving into a small cowboy town but also instant pastorship.

I've held numerous administrative & volunteer positions in the past, including working as a 911 operator and currently the administrator for FLC.  Most of my energy has gone into caring for my three handsome boys and husband as a homemaker.  My heart is fulfilled in serving my family and FLC.  I have volunteered countless hours at the baseball field, elementary schools and church.  I am passionate about fostering deep and meaningful relationships not only with family and friends, but with lost souls.

You can always find me on some ball field, hiking a trail, fishing or camping.  That's what a boy-mom does!